I set off to find out.

(This project is in progress. I’ll update this page as I get things figured out.)

Being that this was going to get attached to a coffee mug, it needed to be wireless. I had two Moteinos that I bought for another project that got put on hold. Now the temperature sensor; I’m not quite sure what the name for this is, but I’ve been going with Linear Temperature Array. Buying six 1-Wire sensors was a bit more than I wanted to spend, and analog is easy enough, so I just picked up six TMP36. I also grabbed some food-grade heat shrink because I assumed that the temperature sensors needed to be as close to the coffee as possible.

This Moteino will be broadcasting back to another acting as a gateway. That one will be connected to a BeagleBone white, also from that other project. The bone will be running a script to take the data from the Moteino and sending it to the internet cloud. I choose to use Exosite because of employment bias.

Since I wanted to do some tests on what kind and quality of data I got back I kept the Moteino on a breadboard with way too much wire between that and the sensors. I will be at some point here trimming that down and having everything connected to the cup.

First, I did some tests with the sensors on the outside of the cup. If this got good enough data, that would be cleaner than putting them in the cup. (it didn’t.) 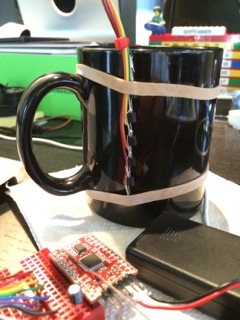 So, some hot glue for strength and heat shrunk. 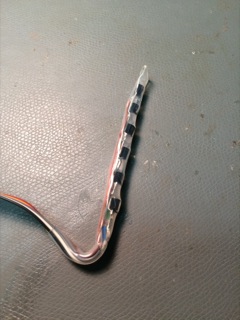 And into the coffee: 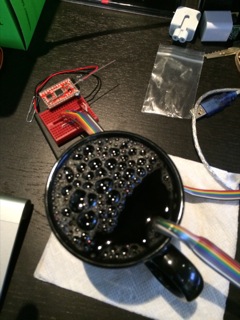 Then finally cut the wires short and soldered them in. 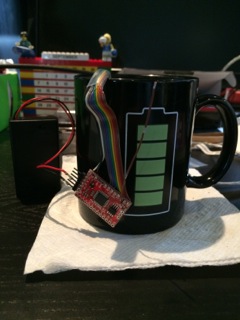 This is pretty straightforward; connect the UARTs. 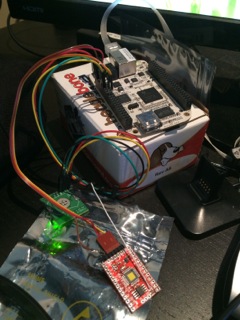 (ignore the BLE dongle for now.)

Having exoline installed makes many tasks with the Exosite platform easier. For me its much quicker to write a spec file, and have exoline apply it onto a new CIK.

Because I can, I’m also building an iOS app. 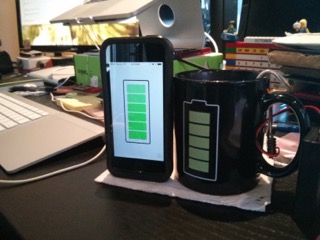 These are plots of the temperature difference between the top-most sensor and the lower ones.

There is a clear dip in temperature difference when the sensors are inside the mug. When on the outside, the ceramic interferes too much blurring all the values together.