I was off building up a diagram in OmniGraffle that mapped the include dependency of a project I’m working on. And it didn’t take to long for me to wonder why I was doing this by hand. OmniGraffle already has a nice importer for when you are working on Obj-C files, but this project is plain C. So I pulled something together quick, its not the prettiest bits of ruby you’ll see. But it will take a bunch of .c or .h files, and dump out a .dot, which you can then open with OmniGraffle.

By default, it ignores system includes (Files included with <>), ignores file extensions and grabs all of the .[ch] files in the current directory. I have it ignore extensions because what I want to see is the high level conceptual “this block of code needs that block of code” instead of exactly which file has which file. You can also specify which included files it should ignore or not ignore. Files that were specified get circles, others get boxes, giving a nice visual cue on where that file is.

Calling mapincludes.rb -I event -s sfx on my current project creates a dot that OmniGraffle turns into: 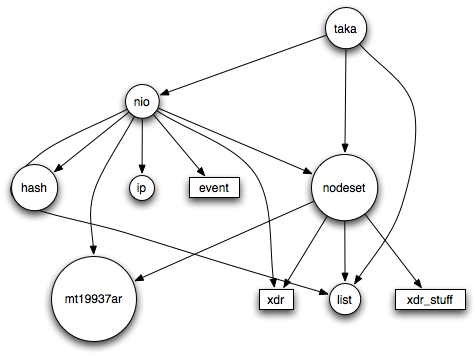 Which you can then do some cleanup work on. (Cuz as you can see, it needs it.)